Experiential Marketing: Fall Into It

The jackets are out, leaves are changing colors, and Starbucks is pumpin’ the pumpkin like it’s going out of style.

Let’s take a look at some experiential activations that we’ve seen draw great crowds and great press this time of year.

Whether it’s served off a fully wrapped food truck or via jetpacks worn by our friendly, attractive, outgoing Brand Ambassadors, consumers can’t resist a free cup of cocoa, especially as the weather gets brisk and the smell of summer fades to Fall. 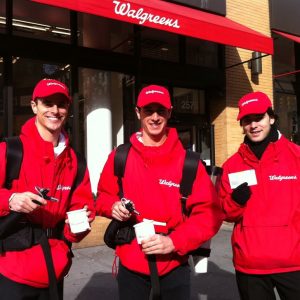 We’ve found a consumer’s level of engagement with a complementary beverage can increase by as much as 40% over hand to hand sampling. That’s quality time to hear from a trusted source about a particular product, brand, or service. Further, once theconsumer receives that cup, they’ve become one of us (even if they don’t realize it) as they walk down the street holding a branded cup sleeve and place it on their desk for friends and colleagues to ask about. The messaging never ends!

What’s more, the vehicle or beverage packs being used for distribution are fully branded, thereby acting as a mobile billboard. So even if a consumer doesn’t stop and take something (though who wouldn’t stop for free hot chocolate, am I right?), the brand is still visible.

If you haven’t been in (or gotten lost within) a corn maze you’re missing out. We’ve executed several mazes and each time continue to be a-MAZED at how much people love them, and the level of customization and interaction they allow for.

For Modern Family we created an interactive corn maze that traveled from Union Square NYC to The Grove in Los Angeles. Consumers had the chance to utilize AR as they traveled through the maze and interacted with the show and it’s characters. We even picked up some nice press along the way … 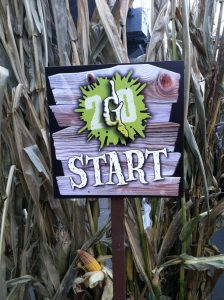 In similar fashion, to promote Scholastic’s 20th Anniversary of Goosebumps, we dropped a 2,100-square-foot corn maze on the deck of the Intrepid. Kids of all ages had the chance to travel through the maze on a spooky scavenger hunt, ending their journey in a pumpkin patch where RL Stein himself read from his book and signed copies for each child afterwards.

Everyone always talks about their name in lights, but what about their name on a pumpkin? We’ve been carving pumpkins for years, and love any opportunity to incorporate this onsite when appropriate. Similar to creating ice sculptures, the process of carving this oversized piece of fruit can be quite the spectacle. (And yes I realize there’s a debate whether it’s considered a fruit or vegetable. I opted for fruit). 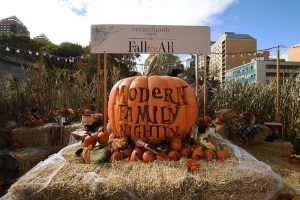 Modern Family "Fall for All" Pumpkin

Apple Farms offer a host of onsite opportunities to market to consumers during this season. From branded corn mazes and pumpkin carvings to standalone activations alongside the usual mainstays. There’s also opportunities for sampling, branded inflatables, and retail offerings inside the Gift Shop. Lastly, it’s a great venue to host an intimate b2b or invite-only/influencer event that gets your audience out of the city. You could include wine tastings, custom menus featuring locally sourced produce, as well as private tours. 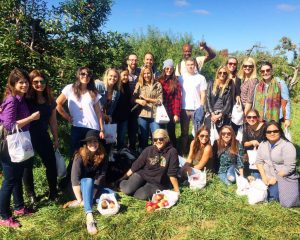 The MAG team knows how to pick 'em.

Last but not least, there’s so much happening from an event standpoint this season. In NY in particular we have things like the Macys’ Day Parade (as well as the blowing up of the balloons the evening prior), the NYC Marathon, and the Halloween Day Parade. Just to name a few. While you’re technically required to be an official sponsor of these events in order to promote here, there are other ways to reach these attendees, and not all of them involve securing private property nearby. Assembling street teams on nearby corners, infiltrating the surrounding streets with pedicab drop-offs, or hosting a pre-party at local bar are all possibilities.

As much as I love the summer, I may be turning over a new leaf (pun intended). Provided we actually have a Fall this year … I’m all in. Now pass the hot cocoa.